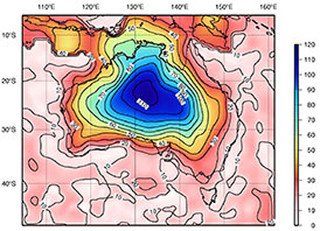 The ability of the Earth’s lithosphere to support loads over geological timescales is measured by its effective elastic thickness (Te), the geometric analogue of the flexural rigidity. Younger and warmer regions (e.g. orogenies, mid-ocean ridges) tend to have low values of Te (<20 km), while older and cooler regions (e.g. cratons) might have values >100 km. The case of Te = 0 describes local (Airy or Pratt) isostasy, where loads are compensated in hydrostatic equilibrium only, without mechanical support.

At Curtin we have developed a method to compute spatial variations in Te, using the wavelet transform. The wavelet transform effectively enables power spectra of 2D signals to be computed at every spatial location in ‘one hit’, in contrast to Fourier techniques (periodogram, multitaper) where moving windows must be utilised. Te is estimated by inversion of the observed coherence or admittance between gravity anomalies and the topography; the coherence is a frequency-domain correlation coefficient, while the admittance is a transfer function. The inversion is performed against theoretical models of plate flexure. The image shows Te (in km) for the Australian continent.

Our research has largely focused on the current controversy regarding the contribution of the continental lithospheric mantle to plate strength, finding in favour of the contention that this layer of the Earth is capable of possessing great strength. The opposing view posits that the uppermost mantle is uniformly weak, with long-term loads supported by the crust only. These findings were achieved by showing that spectral estimates from the wavelet transform had much higher resolution and much lower error than their Fourier-based counterparts at long wavelengths.

Other research has investigated mechanical anisotropy, or the directional variations in Te. The methodology used to detect spatial variations in mechanical anisotropy is very similar to the above, isotropic, case. However we have found that the anisotropic coherence and admittance can sometimes be biased by strong directional trends in the gravity and topography, giving the misleading impression that the lithosphere has anisotropic rheology in such regions.